Lightspeed will tour the North West this summer. Here are our five reasons to see: 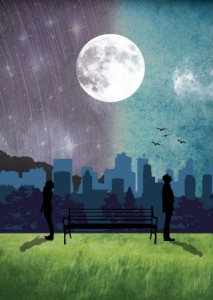 Last year we ran a script call for scripts never seen before on stage and from the many scripts we received Lightspeed was chosen:

This isn’t a game Charlie.

What’s their story? How did they get here? To here, this moment in time.

Told in reverse order, this new play starts at the end and takes us back to the beginning when Charlie and Emma first met, falling in love quicker than the skyline falls to dust and tumbling hopelessly into a cycle of thoughts that aren’t said and actions without meaning.

Organised Chaos is all about showcasing some of the amazing new and emerging talent in the Northwest – this show does exactly that with some great characters to be portrayed. The cast includes Taran Knight “Charlie” and Francesca Heraghty-Smith “Emma”. Behind the scenes we have the writer Clem Haran, the director Mark Croasdale, stage manager Diane Wright and designer Rebecca Luck with Phil Minns supporting with dramaturgy of the script.

Following a number of top reviews and sell out shows this production will be Organised Chaos’ fourteenth since we started in 2009 – during this time we have showcased a lot of new talent to Northwest audiences – actors, writers, directors, designers to name a few of the roles involved in making a show a reality. In 2012 our production of AfterWords won Best New Writing at The Buxton Fringe Festival.

Lightspeed is told in reverse order – A play that starts at the end and finishes at the beginning sounds like a good idea and certainly to watch as an audience we believe it’s very engaging. By using this different approach to time and structure we believe this will be quite a unique experience for our audiences.

To see more information on Lightspeed and book tickets for the show, visit our website – http://www.organisedchaosproductions.co.uk