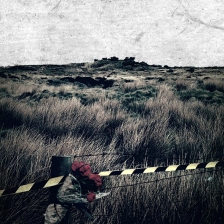 It is based on lesser-known factual circumstances surrounding one of Manchester’s darkest and most infamous legacies. History; there for the taking or leaving. Its true heroes have been over-shadowed by the enemies within the story for too long, and the names of these heroes may be new to you…

Old Ground tells the story of two lovers who, against the backdrop of Manchester’s swinging sixties, became the most notorious and despised serial-killers in British criminal history. Crimes so depraved and macabre, their extents would remain unspoken, and untouched, for another two decades.

From their separate prison cells in the 1980s, rumours of even more atrocities begin to surface. The psychopath seeks to exact revenge on his ex-lover, while she – claiming to be a changed and innocent woman – simply wants her freedom… and at any cost.

But will the truth ever prevail in this very public battle of two abominable evils?

This production was only ever going to be as good and as sensitive as the actors who were prepared to make it a reality – and they do so in the name of others.

There is a mix of familiar names to the Manchester Theatre Fringe scene along with some new faces but all have been cast for their fantastic talent.

After taking a bit of a break the award winning Organised Chaos Productions return with their fifteenth production continuing their ethos of supporting new and emerging talent to showcase their talent and to encourage new concepts in theatre.

The production is limited to nine performances only. Not for ‘entertainment’, just for the record

To see more information on Old Ground and book tickets for the show, visit our website –http://www.organisedchaosproductions.co.uk